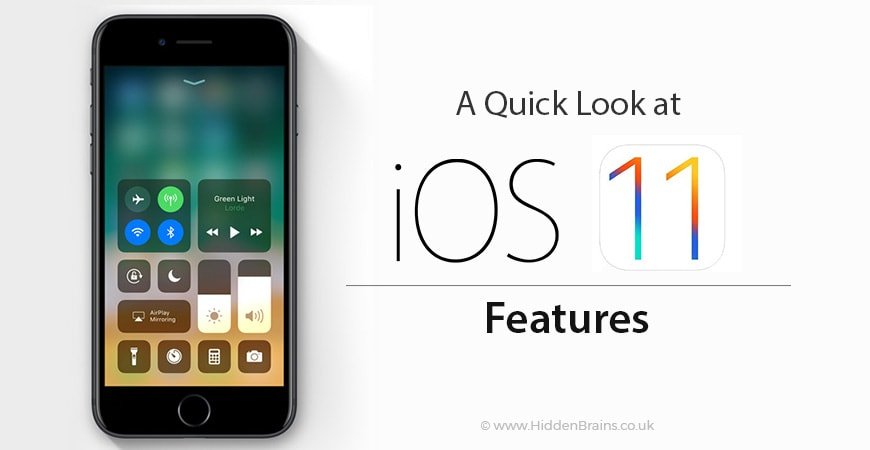 Apple never fails to surprise its fans in its annual WWDC meeting. But who was the showstopper of this WWDC 2017? Any guesses? The biggest announcement from Tim Cook in WWDC 2017 was none other than the launch of newer version of Apple’s operating system: iOS 11.

Developers, designers as well as Apple gadget users were more than overwhelmed with iOS 11 features at WWDC 2017. This blog exposes iOS 11: All the new features that lay the foundation of a new world powered by AR, Siri and Machine Learning.

Multitasking at its Best

Dock allows for the opening of second app, while the first one is still in active state. As per user’s requirement, these apps can be switched with Slide Over or both can be viewed simultaneously with Split View.

We surely haven’t thought of multitasking to be as easy as this without marvellous iOS 11 features!

iOS 11 has come to Apple users in much more organized format:

iPad gets the New Functional Dock

iPad users will experience a new functional Dock appearing at the bottom of every screen:

Highlighting specific area of screen or particular paragraph in PDF will be done quite naturally with new iOS 11 features. Apple pencil allows for outlining on screen, just like you would do it in your notebook to grab the attention.

Taking note of important information could never be easier! Tapping Apple pencil on lock screen of iPad redirects users to Notes App where all the information you write down is saved for future reference. New iOS 11 features allows for scribbling or drawing besides text and saving it as notes.

What’s interesting is that you can search for information using keywords present in handwritten text. This means that user could quickly access required data through handwritten notes, isn’t that exciting and helpful?

iOS 11 has a surprise package for developers. This newer version of operating system has extended support for ARKit, a framework to build intuitive AR based apps.

The concept of Augmented Reality that perfectly blends virtual objects in real world scenario is much appreciated by audience. Capturing and following by this trend, Apple now introduces opportunities for iPhone developers London to play with new ARKit and build immersive experiences.

This ARKit has the power to go beyond the boundaries of rigid mindset and broaden horizons of imagination by seamless integrating virtual elements to real world. Developers are already excited to introduce unique innovative app using this framework.

Capturing and editing photos in iOS 11 is quite simple.To add an element of fun, iOS 11 features allow for innovative effects as described below.:

Siri has become much more intelligent as it turns older. It leverages the power of Artificial Intelligence and Machine Learning to help Apple users in the best possible way. For example, when you ask Siri to play music, it ensures to play your favorite song as it knows your taste well. Can any personal assistant be more intelligent than Siri?

iOS 11 has many opened new gates for iOS developers to explore possibilities. Hidden Brains specializes in iOS app development and houses a pool of developers that are proficient in utilizing the latest features of iOS 11 to build an innovative app.