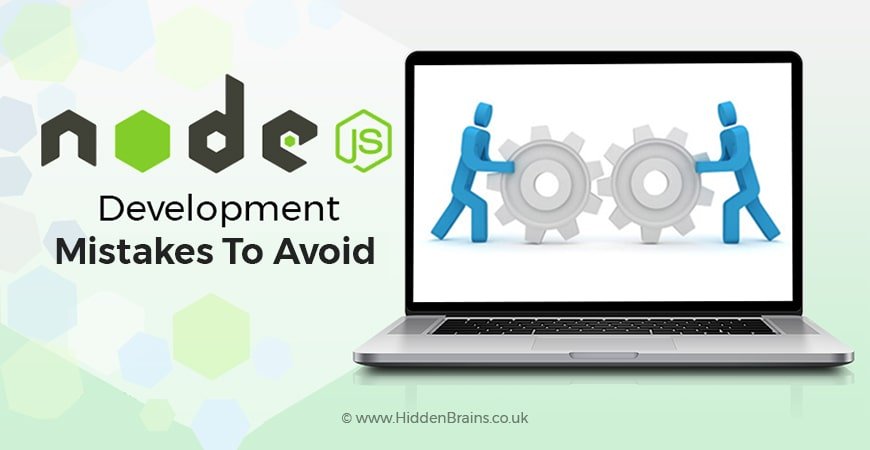 An open-source, cross-platform JavaScript run-time environment Node.js executes JavaScript code outside of a browser. Node.js lets professional developers use JavaScript to write command line tools and for server-side scripting—running scripts server-side to create web page content which is dynamic before the page is sent to the user’s web browser.

The Node.js distributed development project, governed by the Node.js Foundation, is facilitated by the Linux Foundation’s Collaborative Projects program.

With enviable corporate users which includes who’s who of the industry such as GoDaddy, Groupon, IBM, LinkedIn, Microsoft, Netflix, PayPal, SAP, and Walmart Nodejs seems to the way ahead for several large enterprises.

Despite its features, Node.js still continues to draw criticism. However, these mistakes are the most common mistakes developers make which could be easily avoided.  Some Node.js problems like Callback Hell and slow NPM installs can be avoided. It just requires you to carefully avoid mistakes and use the right tools.

When ignored, these mistakes assume gigantic proportion creating difficulties in Node.js development, earning it an unfairly bad reputation. With the right tools and when used properly, Node.js is one of the best JavaScript languages.

Why use Node.js for Enterprises Solutions?

So let’s take a look at some of the most common mistakes developers make with Node.js. It is important to avoid these mistakes in your Node.js development project and experience the real ease and efficacy of developing with Node.js.

Java developers know the importance of callbacks, an effective way asynchronous elements communicate with each other. However, several times it happens that developers continuously press on for callbacks multiple times and in some cases callbacks are erroneously called twice.  This is such an obvious mistake. Simply keeping an eye on such mistakes will be a step in the right for  Remote Node.js developers as multiple callbacks often lead to interface freezes. You can add a return before the callback to minimize or avoid invoking the callback several times. The return statement has no significance in the majority of the asynchronous functions. It is important to obtain the value of the first function before calling out a second.

Some Node.js developers make it a habit of adding a return keyword before every callback invocation. Alternatively, developers can wrap the callback so you see an error anytime it is called twice.

Deeply-nesting callbacks referred to as “callback hell” is not a Node.js issue in itself. Its increasing complexity can make things worst making things go wary and out of control. With nesting callbacks, developers end up hard to maintain code often riddled with errors. One quick fix solution to this problem is to declare these tasks as small functions, and then link them up.

Although, the approach to this problem would be to use a utility Node.js package that deals with asynchronous JavaScript patterns. Similar to “async.waterfall”, their several functions that Async.js provides to deal with different asynchronous patterns.

Co-generator based flow-control: Generators execute asynchronous events without blocking the code. As such, they make your code like synchronous code.

Promises: Promises solve the problem of callback overload in Node.js. If you are not using Promises yet, just get started now. Promises provide control over the value of the result of an error exception.

Developers have come to realize the fact that Node.js is single-threaded. This effectively no two parts of your application can run parallel as anything that blocks the event loop will block everything. It achieves concurrency by asynchronously carrying out input-output operations.

The way out of this mistake is very simple. All it takes is a piece of a CPU-bound request, connected to different clients, to block the event loop. It is equally important to address each and every case individually. You could add open-source modules such as StrongOps into your toolbox to identify and detect any small delays in the event loop.

The console.log in Node.js will print anything literally. Whether it is an arbitrary argument, console.log will print it, all along keeping it typed and spaced well. As developers debug everything with the console.log, the main problem is that each time the developer inserts the console.log, it restarts the server and slows down the app. Ultimately, it will make the app code unusable plagued with a ton of unnecessary code. In addition, the next developer will take on this project might just repeat the entire process.

Instead of having to plug, restart and delete console.log repeatedly, just use the Debug library.

In JavaScript, numbers are floating point data and not integer data. If the numbers overshoot the floating point limit, all calculations might go astray. This often results in Node.js earning the dubious reputation of being unfit for complex calculations but in fact, if the float limits are handled well there would be no problem whatsoever.

These are the major mistakes developers make during Node.js. app development. Undoubtedly, Node.js is a language to develop apps in with a number of modern features designed to make app development high performance and robust. In order to avoid costly mistakes, it is imperative to hire a web developer who understands the functionalities of Node.js and implements industry-best practices.

Get in touch with our team to build robust Node.js development solutions.

Why Should You Hire QA Engineers in Your Team?

All you need to know about IT Outsourcing Models