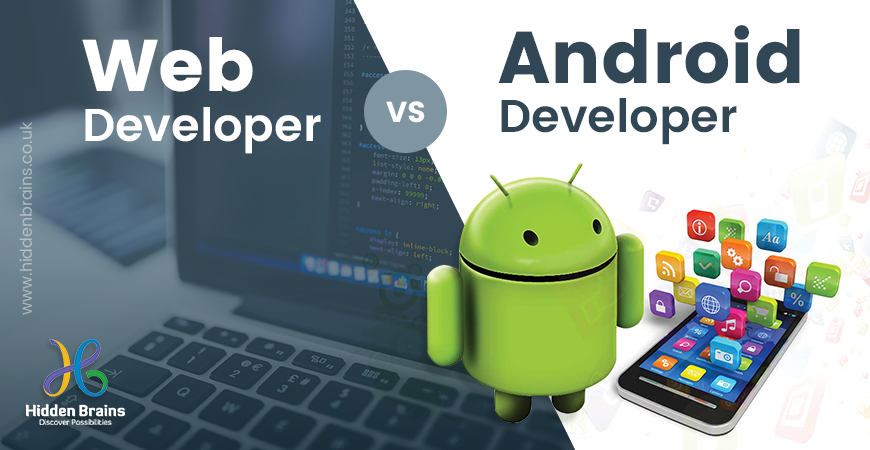 The technology revolution has completely revolutionized web development and mobile app development.  Android and iOS development are coming across the most prominent ways to reach out to users across the globe. Undoubtedly, the exponential growth in mobile technologies has increased the demand of Android and iOS developers and designers. For your business growth, you can explore quick comparison of Web Developer vs Android Developer.

Nowadays, due to the exponential growth of mobile application development, it is very important to hire Android app developer. This is considered to be the rising area for IT professionals. It requires technical expertise of Android and its entire ecosystem comprising different devices, as well as strong knowledge of business sectors. With the increasing demand in Android development, developers have a great way ahead in terms of career advancement, opportunities and more. On the other hand, demand for web developers has been increasing due to the increasing need for businesses going online. There are several companies looking to hire dedicated developers for projects as well as for in-house roles.

If you are at the crossroads of your career and confused between making career choices, continue to read this blog.

In this article, we will talk about and look at Web Developer vs Android Developer on every one of the important boundaries that will assist you with picking the career choice which suits you.

Web development is divided into different parts right from

Android Development includes the planning of mobile applications. Here the engineer is needed to envision and build mobile applications for Android devices and entire ecosystem. As a general rule, the most famous languages utilized to build Android.

3. Assuming you are keen on Backend improvement

When it comes to web development, there is a great deal of versatility involved. Once you master one or many languages such as Java, CSS, C#, PHP or Python or more, you can use programming languages to build different types of applications. The choice of career as a web developer gives you a great deal of flexibility to build different types of applications.

On the other hand, Android development’s level of flexibility is limited compared to web development. If you are specialized in mobile operating systems such as Android platform, you can develop apps for that only.

As innovative way is developing step by step, web designers and Android programmers both have an incredible future ahead. The interest for great and easy to use mobile and web applications is consistently going to ascend later on and not going to stop any time soon!!

The right career path depends entirely on the strengths, skill sets and capabilities of developers as well as weaknesses. While web development seems to be the natural way ahead in the IT industry, the best way ahead is to get exposure in both fields to decide which field is right. It is important to get sufficient training in both fields to finally decide your chosen field.

Thus, at this point, you have a reasonable image of which profession alternative suits you the best! Presently, what are you hanging tight for? Get a space and begin learning!!

Are you looking for web or mobile application development services?

Why Should You Hire QA Engineers in Your Team?

All you need to know about IT Outsourcing Models

Know Essential skills that iOS app developer should have