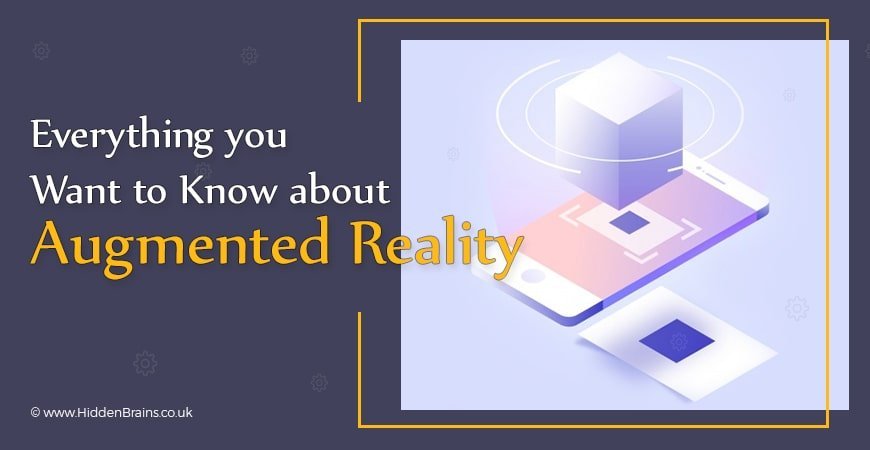 We have stepped into the new era which is influenced by the digital revolution. Technologies have transformed our lifestyles and turned them into easier and faster. Emerging technologies are helping consumers and businesses to explore the real world in a different manner.

There are numerous technologies that are improving dominance in different aspects. One such technology is Augmented Reality. It is a buzzword for enterprises looking to take user experience to the next level providing a highly immersive and intuitive way to explore real-world environments digitally via smart devices.

Augmented reality is also known as AR can turn the environment around you into the digital interface. AR offers the users an opportunity to explore the real world in an advanced way by enhancing the real objects with videos, 2D and 3D dimensional models, and information.

It delivers you an advanced experience with real objects with computer-generated images in a refined manner with the touch of advanced technologies.

According to Statista, “Augmented reality market size worldwide in 2017, 2018 and 2025 is estimated to increase from roughly 3.5 billion to more than 198 billion U.S. dollars.”

As per Deloitte Research paper, “The global AR market was estimated at $5.2 billion in 2016 and is expected to reach ~$27 billion by 2019. The increasing penetration of 4G—and prospectively 5G Technology , thanks to strong government as well as industry support in various countries—are key factors in achieving this forecasted growth.”

How Does Augmented Reality work

AR helps to increase interest among users with their 2D and 3D dimensional models. It turns the information into an interactive and interesting manner.

The best example is the e-commerce platform, with AR technology integration provides a seamless experience to users to preview the products in 2D and 3D dimensional, bringing enhancement in the real products and attracts the users, and peaks the curiosity to know more about products and gain information.

Users can easily visualize the product with real images. AR offers an opportunity for the users to view the characteristics such as size and color, helping to make better decisions.

If a customer wants to purchase a sofa and wants to have a preview of their place, they can easily integrate the sofa set into a real place image and have a preview of the space. They can go a step ahead and even change the color and size to create an ambiance of living room. In many industries including real estate, fashion, medicine, and retail, AR has helped to deliver end to end results.

AR helps to offer high-level experience to the users which is unique to them. It helps businesses to improvise their image and reputation. Along with this, AR can turn as a tool to attract their customers.

How Does Augmented Reality work?

Augmented Reality supports smartphones such as Android and iOS. The same goes for tablets and various applications are available on iPads.

Users can easily click pictures from their cameras and they can add 3D dimensions or filter to the image. The modified image with various effects can turn the actual picture into appealing. Along with this, users can explore nearby places.

Users can use web cameras on their laptops, PC and connected devices. It helps to manipulate a tracker from in front of the screen.

Advanced glasses and lenses enable to change the experience of the users. With them, they can have a high level of experience. AR excludes reflections, as well as enables users to explore the advanced real world in the 3D dimension. In the market, 2D and 3D glasses are available for the customers to explore the real world uniquely.

Augmented reality has turned as a revolution in the business world. It offers a next-generation experience to the customers, and they can explore the real-world and products uniquely. Every industry is looking for Augmented reality app development services to increase its business by offering a unique way to explore the products and services.

Looking to build an Augmented Reality App for your business? Get in touch with our team.

This website uses cookies to improve your experience while you navigate through the website. Out of these, the cookies that are categorized as necessary are stored on your browser as they are essential for the working of basic functionalities of the website. We also use third-party cookies that help us analyze and understand how you use this website. These cookies will be stored in your browser only with your consent. You also have the option to opt-out of these cookies. But opting out of some of these cookies may affect your browsing experience.
Necessary Always Enabled

Performance cookies are used to understand and analyze the key performance indexes of the website which helps in delivering a better user experience for the visitors.

Analytical cookies are used to understand how visitors interact with the website. These cookies help provide information on metrics the number of visitors, bounce rate, traffic source, etc.

Advertisement cookies are used to provide visitors with relevant ads and marketing campaigns. These cookies track visitors across websites and collect information to provide customized ads.

Other uncategorized cookies are those that are being analyzed and have not been classified into a category as yet.