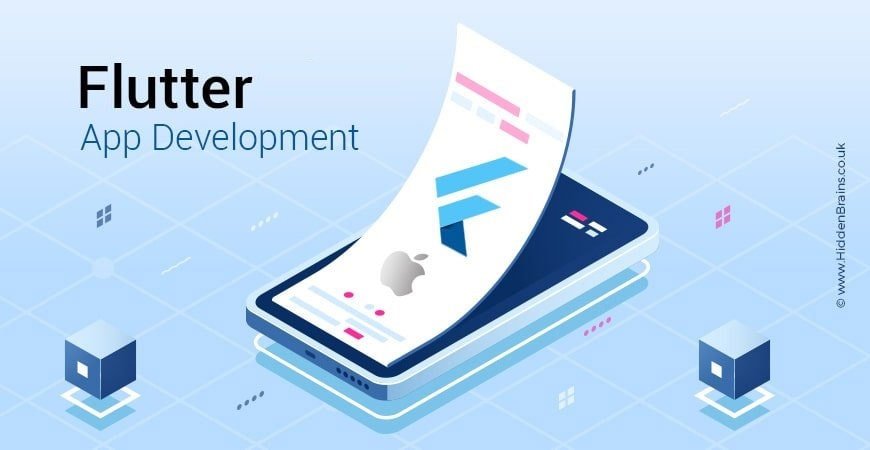 With features such as a single codebase, custom interface, high performance, and more, mobile apps developed with Flutter look and feel beautiful as a native app. Flutter uses Google’s programming language – Dart. Google Flutter has everything it needs for mobile app development in its flutter engine itself.

Advantages of Flutter for Mobile App

Hot Reload: Flutter is all about speed and agility to build mobile apps. Pursuant to this, it comes with Hot Reload that allows quick and easy experimentation, creating UIs, incorporating new features, and fix bugs. It loads code changes into the VM and re-builds the widget tree, preserving the app state. To put it in simple words, Hot reload allows to improvise an app’s look and immediately review changes. In other words, with Flutter, your designer can collaborate with a developer on the UI, making changes.

Quick Time to Market: Simple to understand that Flutter development framework offers quick time to market. You can expect to launch a Flutter app with less resources and man-hours compared to the native apps for Android and iOS. The reason is very straightforward, there is no need to write any platform-specific code to achieve the desired results in your application. Flutter provides a declarative API for building UI to improve the performance.

Large Community Support: Developed by Google, Flutter has frequent updates and issues fixes, as well as there are several meetups to help both startups and established businesses. The Flutter app development community is growing at an exponential pace. The community comprises experts and beginners ready to share Flutter development knowledge. For such a young technology, there are several courses on Udemy and Udacity, as well as Facebook communities.

With Flutter, it is easy to delight your users with built-in beautiful Material Design and Cupertino (iOS) widgets, motion APIs, seamless natural scrolling, and platform awareness. The framework offers distinct widgets, as well as improving the libraries with various interface components. These distinct widgets allow teams to build native app on iOS and Android much more quickly.

With Flutter 2, the horizons get broader. Now use the same codebase to ship native apps to five operating systems: iOS, Android, Windows, macOS, and Linux. That’s not about enhancing and improving web experiences targeting browsers such as Chrome, Firefox, Safari, or Edge. Talking about connected and ubiquitous experience, embed flutter in cars, TVs, and smart home appliances.

Flutter on the web

Flutter 2 is production-quality support for the web.

Flutter mobile to the web: Shared code for both experiences.

Recently, Google Pay switched to Flutter for their flagship mobile app. They have already witnessed gains in terms of productivity and quality. With a unified codebase, the Google team has removed hassles and inequalities between different platforms and eliminated half a million lines of code. Coming to efficiency, several processes such as security reviews and experimentation are cohesive across both iOS and Android.

Copy the code to include Google Flutter detailed info-graphic on your blog or page:

The list of global companies using Flutter is increasing including some global names such as Alibaba, Google Ads, Reflectly, BMW and more. Needless to say, such an impressive client list speaks about Flutter’s quality.

Basically, Flutter comes across as a quick way for cross-platform mobile application development. Future looks bright with the launch of Flutter 2. Now it comes to the target desktop and web without a rewrite.

It would not be an exaggeration that in a matter of a few years, Flutter will officially become the ultimate cross-platform UI framework.

Looking for iOS app solutions? Get in touch with our iOS team.

Tips to Hire Expert Mobile App Developer for your Project

This website uses cookies to improve your experience while you navigate through the website. Out of these, the cookies that are categorized as necessary are stored on your browser as they are essential for the working of basic functionalities of the website. We also use third-party cookies that help us analyze and understand how you use this website. These cookies will be stored in your browser only with your consent. You also have the option to opt-out of these cookies. But opting out of some of these cookies may affect your browsing experience.
Necessary Always Enabled

Performance cookies are used to understand and analyze the key performance indexes of the website which helps in delivering a better user experience for the visitors.

Analytical cookies are used to understand how visitors interact with the website. These cookies help provide information on metrics the number of visitors, bounce rate, traffic source, etc.

Advertisement cookies are used to provide visitors with relevant ads and marketing campaigns. These cookies track visitors across websites and collect information to provide customized ads.

Other uncategorized cookies are those that are being analyzed and have not been classified into a category as yet.